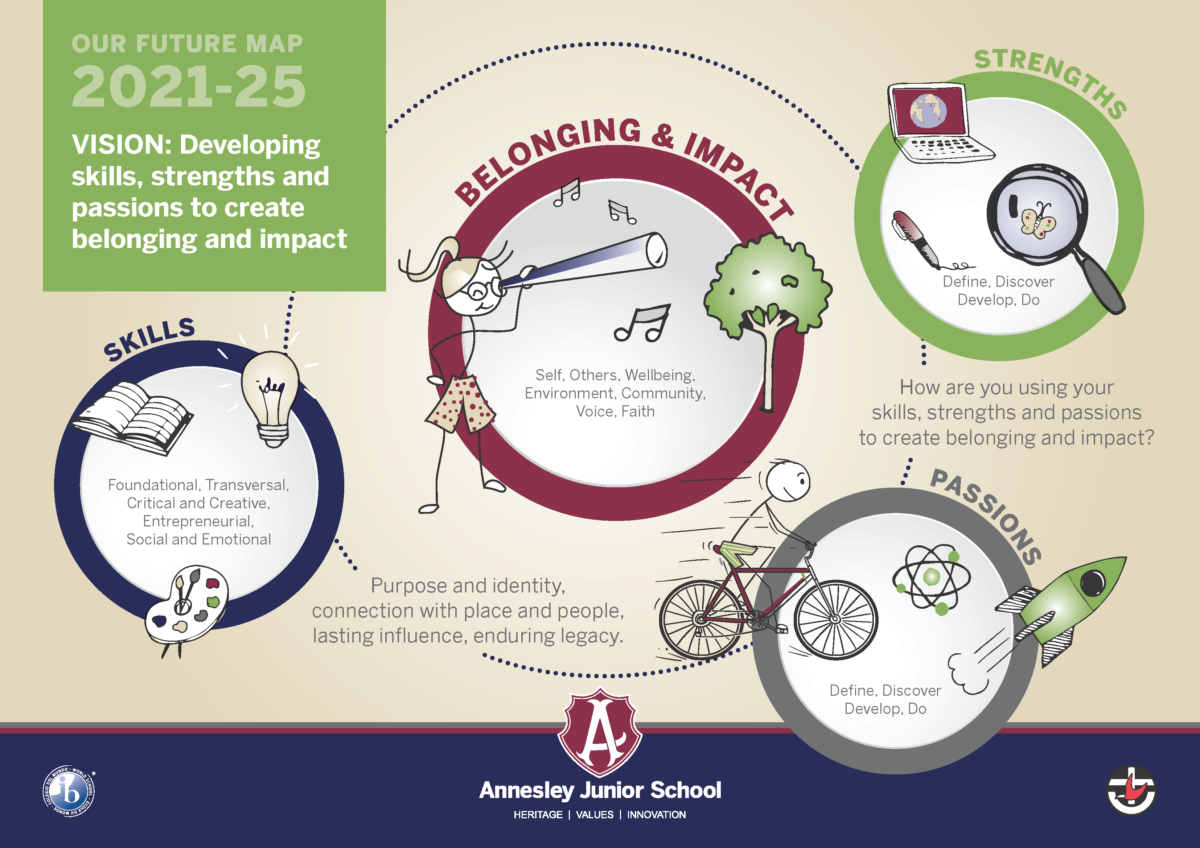 At Annesley, we are passionate about and committed to:

We are grateful to Mr Louka Parry, CEO of The Learning Future, who provided rich insights and advice during the creation of Our Future Map 2021-2025. Louka works globally to support educators, schools, leaders and organisations to thrive in our constantly changing world – including UNESCO, the OECD, PWC, the AFL, Microsoft, Apple and the d.school at Stanford University. Louka is a proud South Australian, being a member of the Green Adelaide Board and receiving recent recognition as one of The Advertiser’s ‘Top 40 Under 40.’ 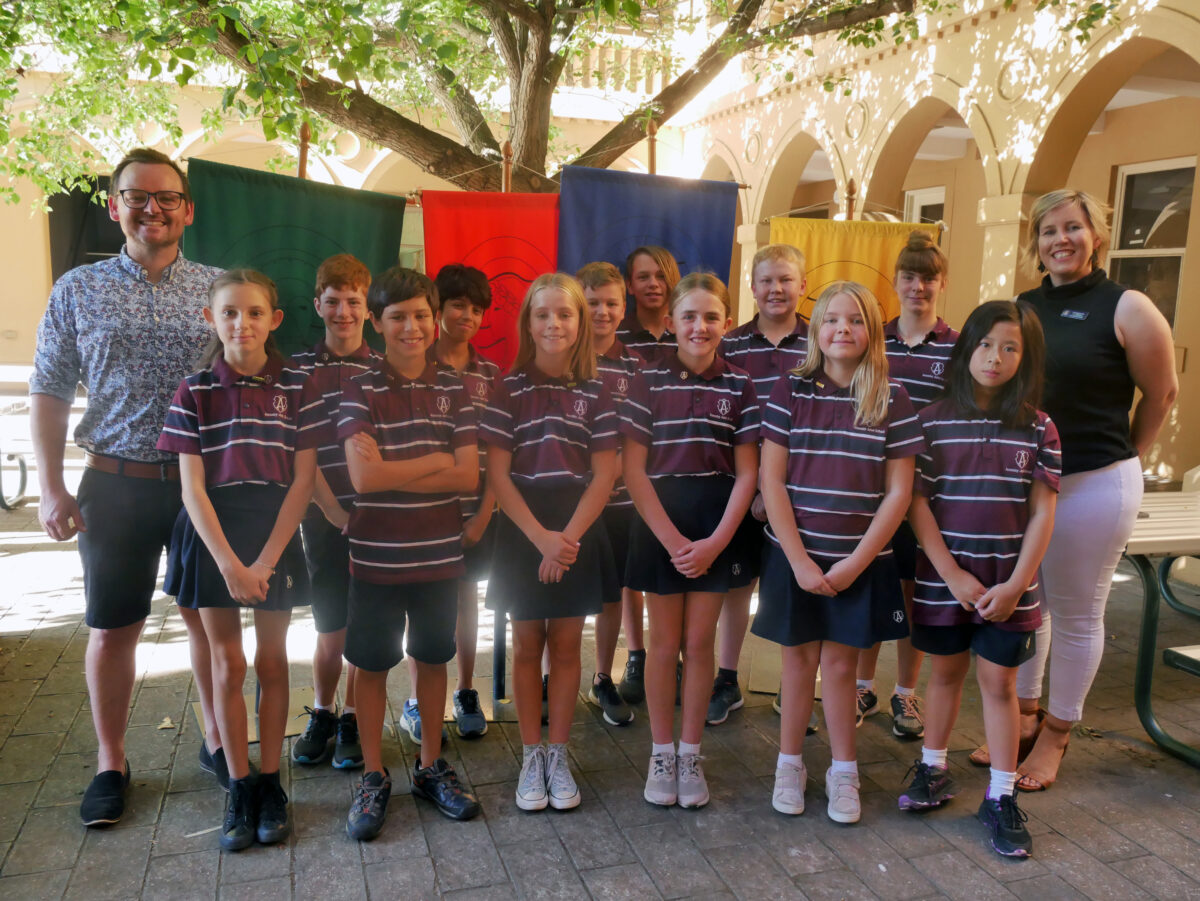 Annesley’s 2021 Student Leadership Team was inducted into their roles during this week’s Assembly. The School Leadership Team is looking forward to working with these capable young people throughout the year: 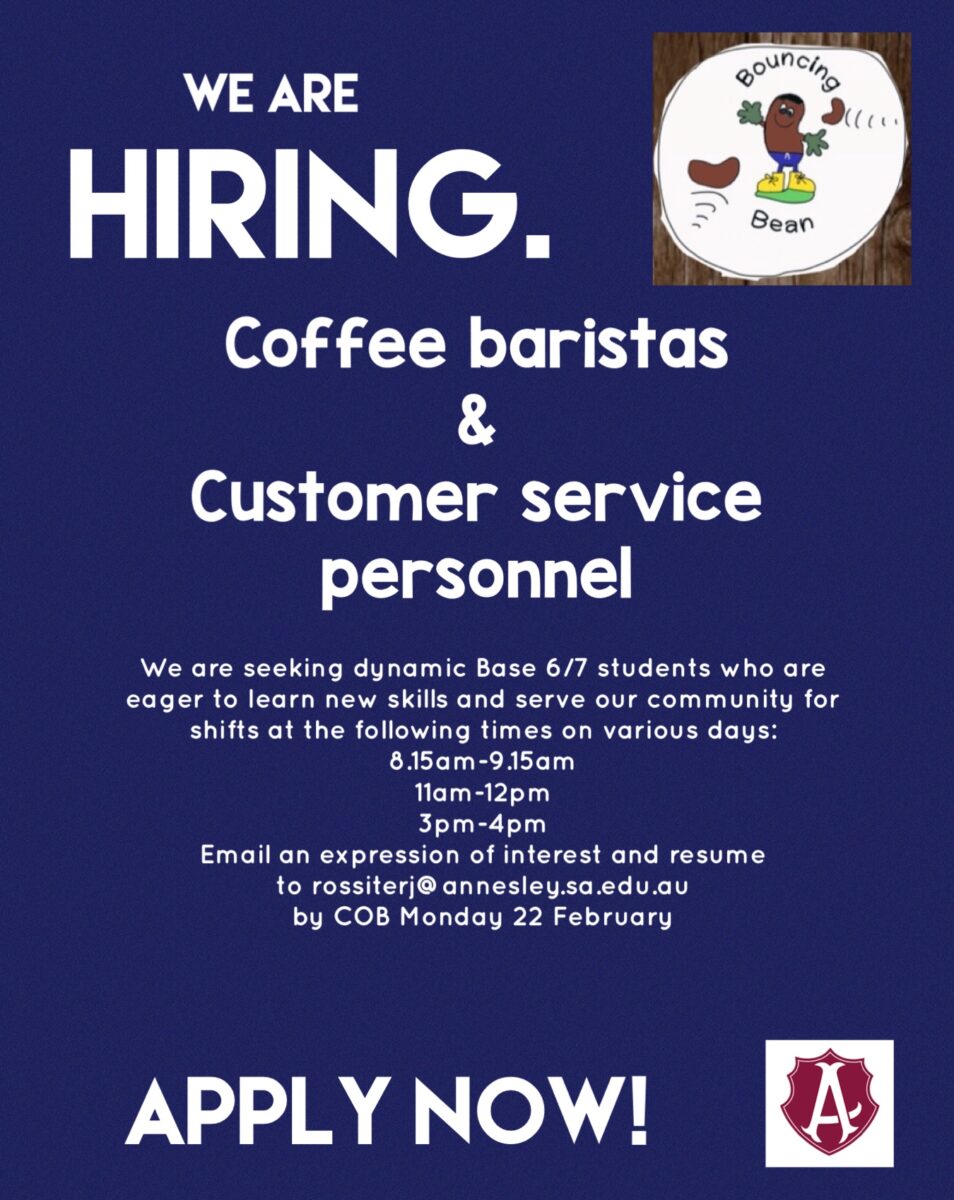 Learning work-related skills of serving others in the Bouncing Bean Café at Annesley is an opportunity offered to Base 6/7 students as part of their learning program. We have just begun the 2021 student recruitment process! The Bouncing Bean will soon be open more regularly to serve our community with our newly trained staff!

Patchell Building Master Plan Update
We are a growing school and as our enrolment numbers and diverse offerings for students continue to increase, we are aware we will shortly need more flexible, engaging learning spaces. It’s amazing to reflect on the fact that it was only 3 years ago that the whole school (ELC to Year 6) was located in half of what is now the Early Years Building! At the Annesley College Council meeting on Wednesday, Sarah Constructions CEO Adrian Esplin, Designer Manager Michael Kilmartin and Swanbury Penglase Director Elizabeth Swanbury updated the Annesley Council Members on the progress of Masterplan designs for our historic Patchell Building. Due to the age, design and heritage features of this historic building, there is much for Annesley’s Council to consider as we continue to progress this important and exciting project. We will continue to keep you informed as this process evolves.

This morning (Friday 19 February) at Annesley Student Leaders Ella & Lucas were joined by The Hon. David Speirs MP, Minister for Environment & Water and Chair of Council, Bruce Spangler AM, to officially open our new Adventure Playground and Bouncing Bean Café. David Speirs even took the opportunity to road test the new monkey bars! David invited our Principal, Luke Ritchie, to a monkey bars contest but Luke declined the invitation. 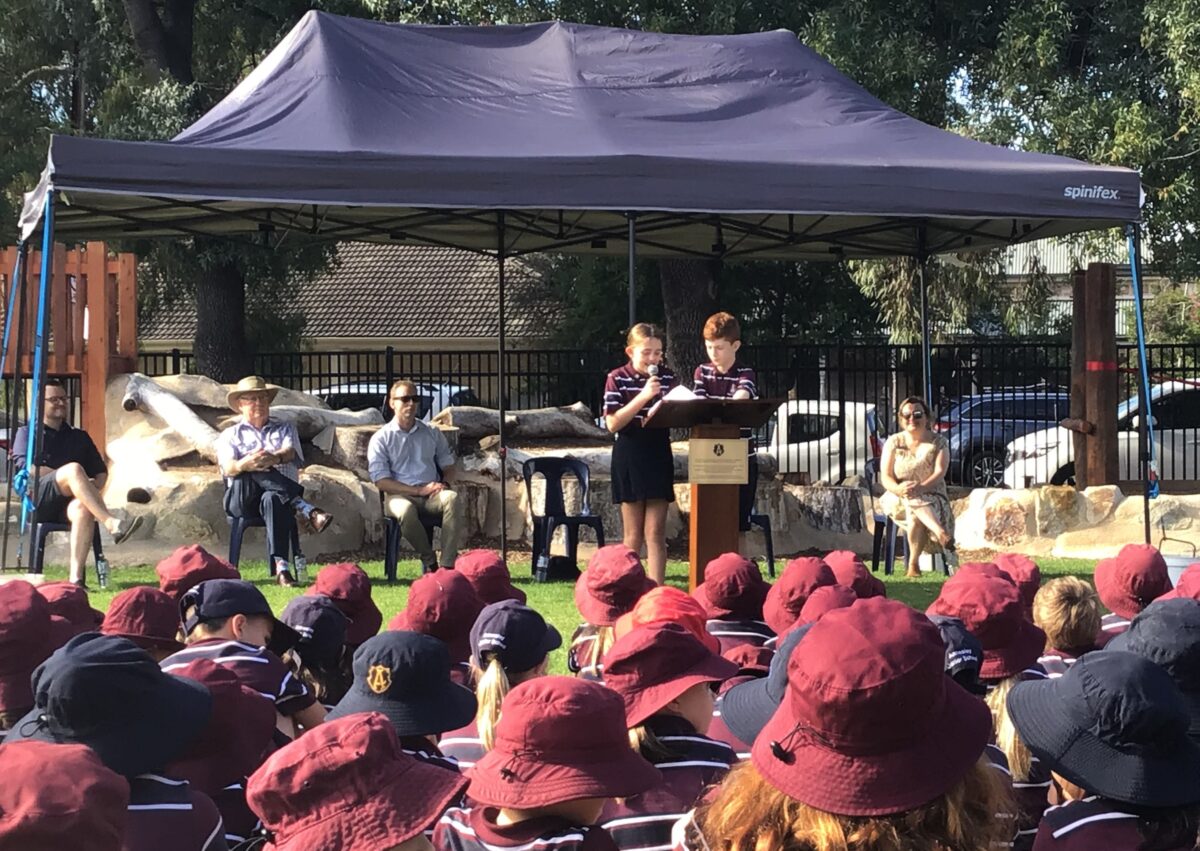 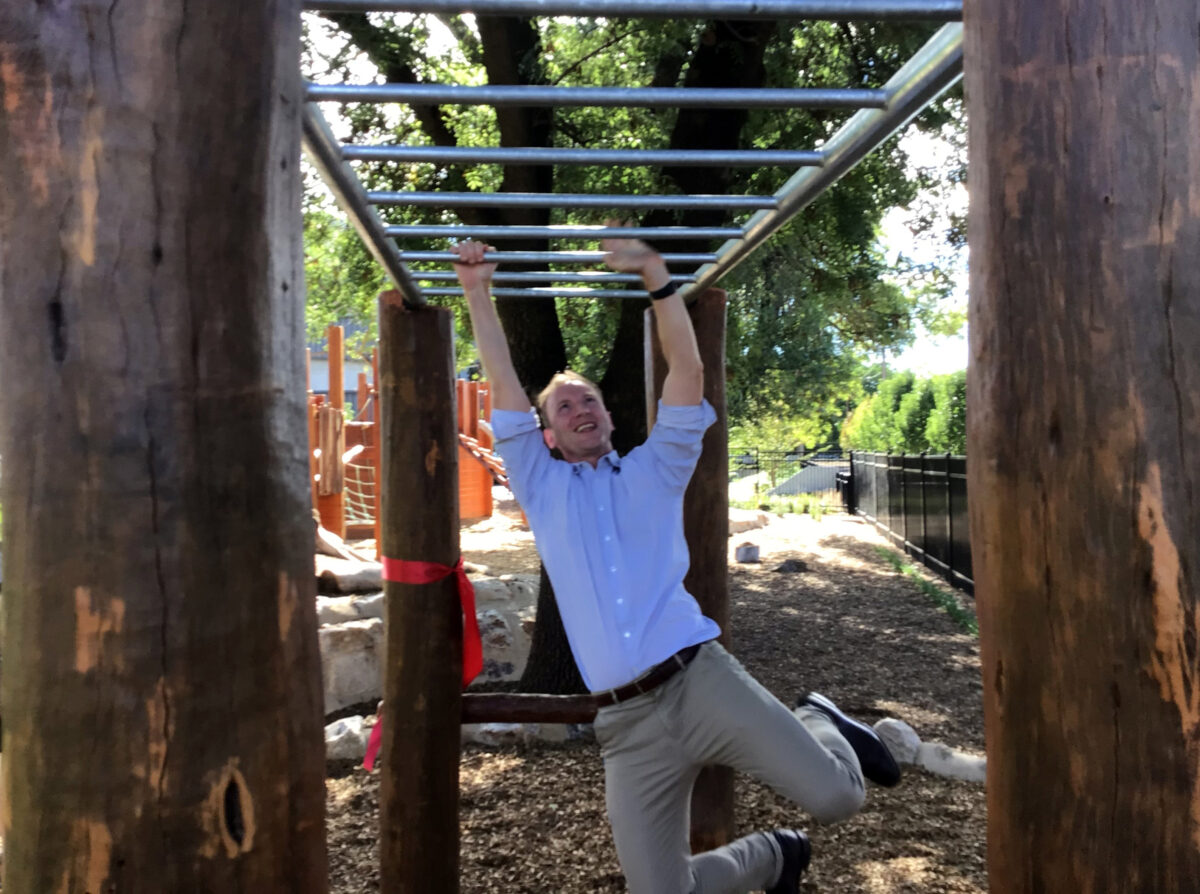 In 2020, our Principal’s Sabbatical Leave was approved and scheduled. Luke had been invited to speak at, facilitate and collaborate with a range of highly regarded academics, business and educational leaders in China, Europe and the United States of America. Due to the pandemic, this Sabbatical Leave did not happen and Luke remained on campus, passionately leading and supporting the Annesley community during the ever changing, complex 2020 environment.

We are pleased that Luke is now able to take his Sabbatical Leave in a COVID safe way, remaining in Australia. Luke and his family are heading to Western Australia where Luke will undertake professional learning, reflection, travel and have a time of rejuvenation with his family.

Luke is scheduled to;

We are grateful for Luke’s ongoing leadership of and commitment to Annesley and the Independent School sector more broadly and wish him a successful Sabbatical. Luke is in his 5th year as Principal of Annesley and his impact and leadership during this period has been significant. Luke and his family love being members of the Annesley community and we are excited to have Luke continuing in this key role in the long term. Our Principal’s Sabbatical Leave commences Monday March 1st and he will also take some Annual Leave at this time. Luke will return for the commencement of Term 2, 2021. Our Deputy Principal Donna Nicolle will be Acting Principal during this period and Head of Primary Years Jo Rossiter Acting Deputy Principal. We are fortunate to have great depth of leadership experience at Annesley. 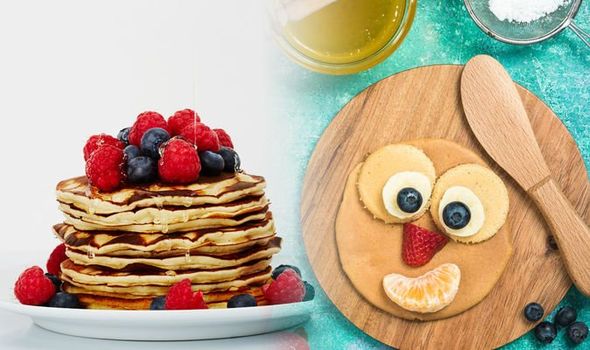 Every year we celebrate Shrove Tuesday, or as you may know it… Pancake Day! Unfortunately, due to restrictions, we couldn’t participate in the celebration as a whole school. However, I have heard how some families still cooked their own at home, or bought pikelets from the supermarket. If you didn’t get the opportunity, you may still want to remember this over the weekend.

So what is the meaning behind this special day? How and why is it celebrated around the world? Shrove Tuesday is actually a Christian festival celebrated in many countries across the globe. It falls on the Tuesday before the beginning of Lent – a period of around six weeks leading up to Easter. During Lent, Christians give up luxuries to remember when Jesus went into the desert for 40 days to fast and pray, to prepare him for his greatest test.

The exact date of Shrove Tuesday changes from year to year in line with Easter, which is set according to the lunar calendar. (Did you know, Easter is celebrated on the first Sunday following the full Moon that occurs on, or just after, the spring equinox?) The name ‘Shrove’ comes from an old word ‘shriving’, which means to listen to someone’s sins and forgive them. In Anglo-Saxon England, Christians would go to church on Shrove Tuesday to confess their sins and clean their soul. In other words, they would be ‘shriven’.

In the United Kingdom, Ireland, Australia and Canada, Shrove Tuesday has another name. It’s called Pancake Day! Traditionally during Lent, Christians would give up rich, tasty foods (luxuries) such as butter, eggs, sugar and fat. Shrove Tuesday was the last chance to eat them – and what better way to do so than with a delicious pancake!